There are some places you visit and can’t decide whether you want to scream them to the world or keep secret because they’re just too good to share. And El Nido is one of those places. Located in the province of Palawan in Bacuit Bay, the region was discovered nearly 22,000 years ago.

The water is clear as crystal, pristine as paradise, shimmering turquoise, the sands are white like flour and the towering limestone cliffs left me staring into the sky in wonder. Scattered throughout the islands are unspoiled lagoons and tiny hidden beaches, and under the water lay an endless world of incredible corals and rainbow coloured fish, still untouched after all these years. That’s El Nido!

Island hopping is of course your first priority. This is what El Nido is famous for, and most likely why you’re going there in the first place!

The island hopping tours are standardised and you can choose from numerous different operators. Each one will offer 4 different tours, aptly named Tour A, B, C and D. We only had time for Tour A and Tour C, both of which I’d highly recommend. Anyway, here’s what you can expect.

Tour A is one of the best and most popular island hopping tours in El Nido. During the day, you will discover beautiful lagoons, beaches and snorkeling spots where you can swim and admire the corals, the colorful fauna and its hundred of fishes species. In the afternoon you’ll definitely enjoy lazying on the hammock while catching the beautiful sunset at the last stop of your island hopping.

Most of us dreaming of El Nido with the image of Big Lagoon in our imagination. More beautiful than what I think of. It is the most picturesque of all destination in the island hopping. Calm and crystal clear water, big stone that covers the lagoon and the combination of colors from the skies, trees and the seas. That was a perfect destination for honeymooners, soul searchers and wanderers. We will definitely come back in this island!

Located on the cove of Miniloc Island. The Small Lagoon is a pocket-like small pool. It’s a bit difficult to get there, as the only access to the Small Lagoon is a tiny cave-like opening in the lower portion of two big limestones, which looks like a huge rock with a pocket-sized hole beneath. Though the area is small, it’s mysterious in its own way and will offer you a peaceful visit, with beautiful colors in its every aspect.

Shimizu has long been considered as one of the nice snorkeling sites. Indeed, this is home to a variety of marine life. There are a lot of different fishes that you can see here, making snorkelin’ even more fun!

The Bangka anchored in a very nice white beach full of palms. It was really gorgeous. But going to the hidden gem is never easy.

Ouch! Those rocks hurt 😖 (rubber shoes or aqua shoes are highly recommended). So we walked, glided to the water slowly until Ed and I reached the hole or small tunnel rock formation.

One by one passing through this small hole or tunnel. At first, I wondered whether I could fit myself in the hole. 😂

So that’s what happened, I did my best to fit myself into that hole.

There, we were welcomed by this small enclosed lagoon surrounded by dark rocks and limestone. I couldn’t explain the feeling of being there, the place was a bit creepy. I was bewildered. The lagoon has an unusual feel. 🤭

Our last stop after a long day on tour. Seven Commandos is named after the 7 remaining Japanese commandos who lived in the island after World War II.

It is one of loveliest islands in El Nido. It has a long stretch of white sand with bar and cottages in the area. Shallow sea level and of course the best spot for sunset. It gives feeling of tranquility and serenity while resting on the sand as the sun is settling down. 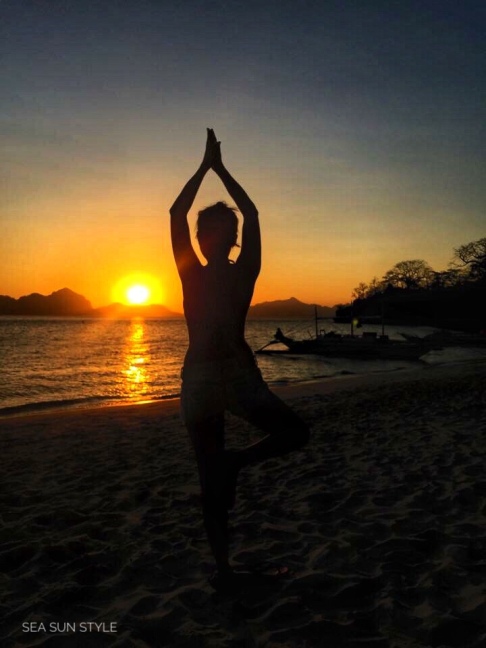 Tour C is more exciting among El Nido Tours. It will take you on a journey to beautiful islands, beaches and snorkeling spots, and to an uncanny place: Matinloc Shrine.

Hidden between two rocks is a strip of white sand beach. The beach is really hidden, that you can’t see it unless you go further in between two huge limestone rocks and cliffs. 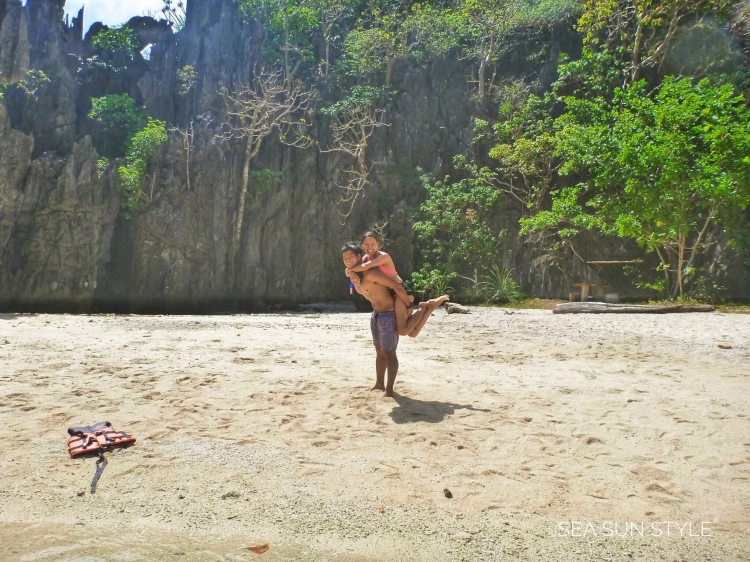 Hidden among the lush forested island is the Matinloc Shrine (also known as Shrine of Our Lady of Matinloc and Shrine of the Blessed Virgin) a sacred monument built in 1982 to honor the blessed virgin mary.

El Nido
A heart shaped abandoned island with different stories but with a very beautiful and spectacular view from the top. One must trekk from the karst to be able to see the whole area. You’ll be mesmerized from the aqua blue, turquoise and green water that can be seen and you should not forget to take a pose as you head up. Truly an amazing creation.

Matinloc is a local term for “beautiful”, indeed, such a beautiful island! We were blown away by an awe-inspiring view!

Our boat stopped at the end of huge rocks and limestones. I heard we were going to a Secret beach. But I didn’t see any! Well, it’s literally a secret. Haha I could only see rocks and that’s it. I asked, where’s the beach?

Then the boatman said just follow around. Oh oh! It was only a matter of seconds when I realized people were swimming under those huge rocks!

I regret though, I didn’t have the courage then to swim because the waves and current were strong. And it made the water unstable. 😭 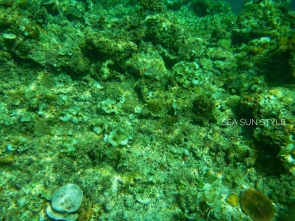 And yes, according to hubby there’s hole below the rock formation, and you need to swim and go through that hole to find the secret beach. It was really a paradise, he added.

Helicopter Island (officially called Dilumacad Island) is home to towering cliffs sandwiching thick dark green rainforests. On one side of the island is a massive mountain. From afar, its cliffs looked like its edges are rounded, making it look more nurturing than the other islands. Most parts of the mountain was naked, baring its contours, carved by time, if not God himself. 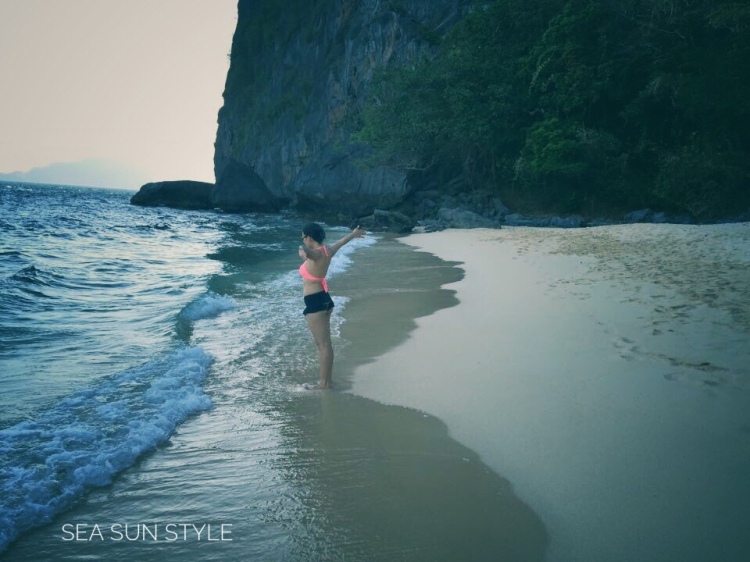 That moment, I found exactly what I came here for — peace of mind. And how can any other moments beat this? A great, peaceful, happy time with hubby in Paradise. It was a different kind of high. If only I could stay here forever.

Star Beach on the Tapiutan Island is another spectacular snorkeling site featuring the wonders and beauty of the coral reefs, colorful fish, star fish and sea urchins. More often than not you’ll see some turtles. This beach is usually the tour lunch stops.

It has always been my passion to watch sunset and I know that no sunsets are ever the same. It was my first time in El Nido so, catching the sunset was in my bucket list. 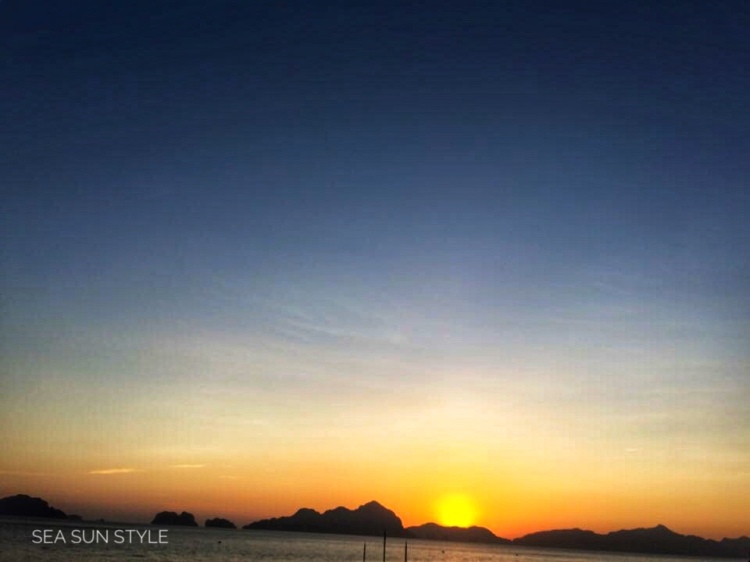 We have had a very memorable adventure in El Nido! Indeed, El Nido is a showcase of the Philippines’ geological and biological diversity. To put it simply, this island blew me away. It really is a heaven on earth!

What’s your unforgettable experience in El Nido? Would be glad to hear them in the comment box below.

Hello Stranger! We're thrilled you're here. We are Ed and Shay, originally from the Philippines but currently living in Ireland. We are husband and wife, best friends and travel companions. We've set up this personal blog as our travel journal documenting the best and memories of our adventures TWOgether. Please join us in our journey of a lifetime! View more posts

This site uses Akismet to reduce spam. Learn how your comment data is processed.